When the world gets me down (which it does on a disturbingly regular basis), I normally jump on a bike, point it towards the horizon and not come back again until I’m feeling better… I’m sorry to say the world got to me this week and I was very much in need of some cycle therapy; only problem was, I’ve been so busy recently that I was so tired I couldn’t face going for a ride.

So, I did the only thing I could do. I headed out to the shed and built myself a new bike instead.

Anyway, onto the build. Unfortunately, it didn’t occur to me take any ‘before’ or ‘during’ pictures so you’ll just have to settle for these few ‘after’ shots: 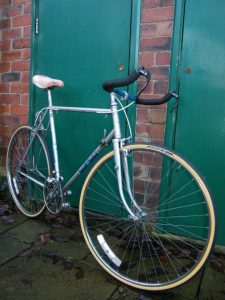 It’s a Sun GT10 from the 1980s, originally built by Raleigh and quite literally bristling with parts branded as Raleigh and / or Sturmey Archer which (according to the internet) were effectively one and the same company around that time.

Essentially, it’s your traditional 27″ wheeled, steel framed 10 speed road bike which came to me with the original vinyl saddle, foam wrapped drop bars and awful ‘safety’ brake levers. The amber wall Schwalbe tyres you see here are modern replacements and really aren’t my favourite thing in the world but they have good tread, puncture protection and I suppose they suit the age of the bike well.

The drivetrain is the original 10 speed with Raleigh branded chainset and derailleurs; I’ve got a feeling they’re actually made by Huret because they look exactly like the ones on my Falcon, only with different engraving on the derailleurs themselves and the downtube shifters. All I needed to do was throw a brand new KMC chain on, replace all the cables and make a few adjustments to get it purring again.

The modern twist I decided to put on this bike was a set of Charge Slice bullhorn bars in dazzling cyan. The blue compliments the decals on the frame and the underside of the saddle (albeit a slight mismatch). The brake levers are the real extravagance on this bike though; they’re Cane Creek 200TT and yes, they are made of carbon fibre! I used these levers once before on a Coventry Eagle single speed and I can report they’re super light and really comfortable to use even if they were a little tight fitting into the bar ends. 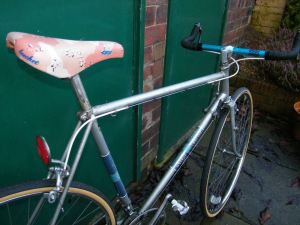 The final modern touch comes in the shape of a special edition Charge Griffin Bucket saddle with an odd camouflage design.

Normally, I like to match the colour of the saddle with the bars and / or bar tape but with the blue bars and the silver frame and the… whatever colour that saddle is, the only thing I could do was put black bar tape on.

Well, it’s not my favourite bike of all time and as similar as it may be to my Falcon, I don’t think it’s anything like as nice but that’s probably a good thing; if I don’t fall in love with it, it’s so much easier to sell!

10 thoughts on “house of the rising sun”